As shooters arrived early Sunday morning at Blue Trail Range in Wallingford, they were met with a beautiful sunrise and comfortable 82 degree temperature with very little humidity.  As luck would have it, though, once Mother Nature heard Match Director David Lyman announce “Commence Fire”, the branches of trees began to sway in earnest. Looking down the firing line, the blades of the wind mills were humming a taunting whirring sound and the blades of grass were dancing a quick jitterbug.

Forty minutes and two targets into the match, it was evident that veteran master Craig Samuelson (photo right) and junior marksman Dylan Lorence were executing the perfect shot plan, squeezing the trigger, and reading the wind direction and velocity flawlessly.  Both competitors finished the Dewar match with an identical-matching score of 398.18x.  When the tie was broken, Craig was declared the Match Winner and Dylan settled for 1st Sharpshooter/Marksman. 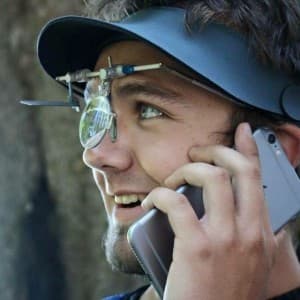 “Settle” is probably not the right adjective, though, for Dylan (photo left).  Only in his 2nd year of outdoor shooting, he has been working diligently at competing at the Master level.  With a later start to the game than most of his teammates on the line, he has learned to make valuable use of his practice time and every shot count.  He rarely misses a Midnite/Moonlite league night (where he just fired his first 200), and competed in most of the Connecticut summer outdoor matches, giving up many weekend fishing trips on the family boat.  Already a senior at Xavier High School, and in the heart of the highly selective admission process to the United States Coast Guard Academy, he realizes he has no time to waste. Not to mention, that he also wants a spot on the academy’s varsity rifle team.

The 100-yard match was next and Dylan continued to hold hard and posted a 393.  Tenacious Sub-Junior Emma Acampora was only one point behind for 1st Sharpshooter/Marksman.  On paper, it appeared that Craig was losing some ground with a 385 finish.  This match turned out to be the only yardage, though, that he did not take the “Match Winner” title.  He went on to post a 396 and 399 for the 50 meters and 50 yards, respectively.  His final grand aggregate score of 1578 easily garnered him the State Prone Championship title.  Dylan’s final score of 1571 earned him the right to have his name placed on the Joe Carten Memorial Trophy for High Junior.  (Editor’s Note: Sergeant Joseph Carten founded the Stratford PAL Junior Rifle Club in 1951 and served as coach for many years).

In the optional Any Sight Prone Championship, Dale Petty won the first match with a 399, while Bill Neff dominated the remainder winning accolades in the consecutive 2nd (score of 393), 3rd (397), and 4th (400) individual matches, and grand aggregate of 1587 to Dale’s final 1577.

On behalf of the competitors, the match host thanks Craig for agreeing to shoot Metallic Sights in order for Connecticut to field the ten shooters necessary to support a team in the NRA Postal Prone match.  Results of the team awards will be announced by NRA in the fall. 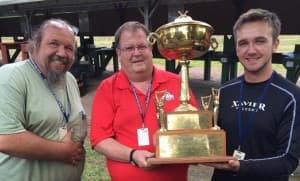