“Home of Championship Shooters” is the logo painted on the 15-passenger van panels and walls of the Blue Trail Range Junior Rifle Club, and the written word proves to be correct as they captured fifty percent of the medals in the smallbore and air rifle events.  Amongst all the daily hubbub at the range, however, a marksman resides minding his own business, coming to and from the range to practice and participate in local matches, as silent as a snake, and just as stealthily posting personal best (PB) after PB scores, with little fanfare from anyone or visible signs of exultation from him.  I think the silence is about to end—let’s introduce John “Johnny” Lesica (photo on left). This is a kid that has never won a match, probably doesn’t even have a full box of shooting trophies in his room, and has to borrow an air rifle.  And, yet, he just won the Gold Medal in the Men’s Air Rifle event with an incredible PB score of 576, using a borrowed air rifle (donated to the state association by the Friends of NRA grants).  And, I can’t forget to mention that he just started the search for a college with shooting and wants to be a gunsmith.  This score also grants him a “state champion” invite to the National Matches at the USA Shooting Center in Colorado Springs so he can add a “national championship” score to his shooting resume.  Congratulations Johnny and best of luck in Colorado in April at your first national match event and with your college search!

Six points behind Johnny with a 570 for the Silver was Cos Cob’s Kyle Kutz. Kyle has had quite an illustrious career as a well-known Sub-Junior and does not show any signs of slowing down as he advances into the J2 category.  Firing a 569 for the Bronze was Blue Trail’s Michael Acampora.  Completing the men’s air rifle event were:

In the Men’s Smallbore event, the scores were very close. Mike Acampora captured the Gold and state invite with a 558.  Kyle captured his 2nd Silver with a 554, and Blue Trail’s Scott Condo won the bronze with a 553.  Scott is captain of Vinal Tech’s rifle team and is also at the tail end of his college search with riflery as a sport.  Tyler Glynn, returning home from the Maine Maritime Academy (with no practice), fired a 550.   Other participants/scores in the Men’s Smallbore event were:

In the men’s air pistol event, US Coast Guard Academy’s Cadet Kevin Bennett fired the high score of 556 to compete as an “at large” competitor. John Marrinan captured Gold & State Champ invite with his score of 539.  Cadet Bennett also stepped up to the line to fire a 544 in the Men’s Sporter Pistol, again competing in the “at large” category. 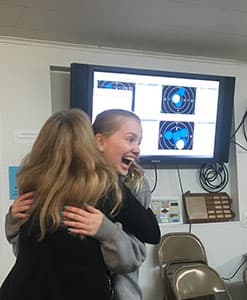 Then, we come to the Women’s events; saving the best for last. The only competitor to fire an “automatic invite score” to the National event in Colorado was Blue Trail’s Laura Milukas (photo in the right; a v-e-r-y happy Laura being congratulated by her mom).  Gaining solid roots from the Cos Cob Rifle Club, she has come a long way in a short amount of time.  Her dedication to the sport is quite evident on the range.  She fired a PB 385 in the state JORC for the Gold and State Champ Invite in the Women’s Air Rifle Events.  Two weeks later she goes to Palmyra and fires a PB score of 582 (in a 60-shot match vs. 40 in this match).  Two back-to-back, incredible PB performances in two very prestigious matches for this new J2 shooter—these matches are generally won by J1 or “home for the holidays” collegiate shooters!  Some college coaches are going to be on her radar. Teammate, Kaitlyn Kutz captured the Silver, just two x’s behind Laura.  These two girls provided quite a bit of excitement to the spectators as they were firing their match on the same relay.  Firing a 381 for the Bronze was Stratford PAL’s Hope Kavulich.  The girls traded medals for the Women’s smallbore events.  Kaitlyn – Gold & State Champ Invite (569), Hope – Silver (561), and Laura – Bronze (549).  Remaining scores for the women’s events follow:

Rhode Island also fired their JORC at the USCGA; a very cordial group to have around. Rebecca Green was the top gun for her state.  Firing a 384 in air and 563 in smallbore, she easily captured the Gold in both events.  The Connecticut State Rifle & Revolver Association (CSRRA) was happy to host both events so that Rhode Island could have a place to shoot and compete for RI state medals in invites.  We thank the new CMP Rhode Island Director Brenda Jacob for her coordination and support.

As a reminder, this match is fired under USA Shooting rules, which states that residents (which is defined as to where the competitor holds a current and valid driver’s license or where the competitor’s parents / guardians reside) only are eligible for the 1st, 2nd and 3rd place USA Shooting State Champion medallions but may compete for invitations to the National Junior Olympic Shooting Championships (NJOSC) in the “at large” category.  This year’s state event was sponsored by both the CSRRA and Bridgeport Rifle Club (BRC), and fired on two ranges (USCGA & BRC).  Scores from both venues have been combined and are attached.  Consolidate results from all states will count for national invitations to the JNOSC in Colorado Springs held in April; selected attendees will be announced by USA Shooting at a time to be determined by the Competitions Division.   CT and RI have separate medals and will be distributed shortly by the CSRRA.

CSRRA was extremely pleased that the USCGA was able to offer their range as one of the host sites for Connecticut, due to the efforts of Head Shooting Sports Coach Richard Hawkins and Assistant Rifle Coach Hap Rocketto.   83 entries out of the total 109 (up 21 entries from 2016) competed at the USCGA.  Electronic targets make competitions more efficient, spectator friendly, and allows for precise scoring without the human element involved of plugging a shot, making judgment calls, and eliminating mathematical errors.  Most importantly, it provides these shooters the best of conditions for an ultimate performance.  The CSRRA is happy to continue to play a small part in showcasing this facility to Connecticut’s best athletes and presenting it is an option for furthering their education and shooting at the collegiate level.  Any interested shooters can contact Head Shooting Sports Coach Richard Hawkins at Richard.N.Hawkins@uscg.mil.

On behalf of the Board of Directors of the CSRRA, we would like to express our gratitude to the USCGA staff for putting in the long weekend hours required for this match to run: Assistant Rifle Coaches Hap Rocketto & Bill Simpson, GM2 Brent Craemer, GM2 Nick Dracon, MUI Joe D’Aleo, Gunner Paul Lahah, GM1 Charlie Petrotto; and, Assistant Pistol Coaches Will Hart, Coach Wayne Gronlund & Chuck Griffin. All of these gentlemen made the coaches, parents, and athletes feel welcome.  Special thanks to the coaches that gave up their time to bring the athletes to the match in blizzard conditions (Michele has learned that, what she terms as her “sexy” car, is better saved for summer days as it had to be flatbedded and driven around by a tow truck to and from the range); and everyone for your cooperation throughout the registration, firing, and posting of results.  Remember, patience is a virtue; and, you are dealing with volunteers.  Although it is an electronic scoring range, results and paperwork and writing articles remain a manual chore (I don’t work any faster when you send emails asking me if everything is done J; this match has to be consolidated with other match directors and these things take time). Finally, congratulations in advance to our Connecticut and Rhode Island athletes that secure an invite to the nationals.  For those that are able to accept the invitation, we wish you the best of luck!  Any questions, contact me (Deborah Lyman) at nra.cmp@gmail.com.