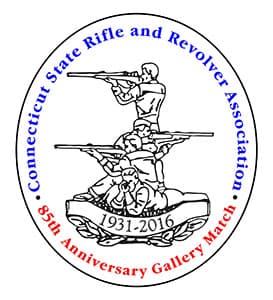 Welcome! This year, the Connecticut State Rifle & Revolver Association (CSRRA) celebrated the 85th Anniversary of this prestigious match.  Merit Medals, sponsored by the CMP (Civilian Marksmanship Program at www.odcmp.org), were presented to each competitor firing in the Sub-Junior and Junior portions of the match—Gold for Juniors & Silver for Sub-Juniors with the Gallery Match logo on the front, and a percentage noted on the back of the medal based on their fired score (100%, 99%, 98%, 97%, 96%, 95%, 90%, 80%, 70%, 60%, and 50%).  In the Sub-Junior category 99% medals were awarded to Emma Acampora, Blue Trail Range (for the 2nd year in a row!), and Kyle Kutz, Cos Cob Rifle & Revolver Club.  Kyle’s sister, Kaitlyn, was presented a 98% medal for her Junior Individual Match Winner score of 197.

The big winner of the match, though, was Jake Mnich (right). He fired a clean match (score of 50) in the prone and sitting events, dropped one point in kneeling, and two in standing for a grand total of 197.  A quiet senior at Suffield Academy, he has been a member of their rifle team for the past four years, enjoying three years of state championship titles.  When not honing is skills on the indoor range, he enjoys skiing, and playing soccer and golf.  Even with a tough academic load of advanced classes at Suffield Academy, he manages to operate as a beekeeper and owns Jake’s Bees.  While still undecided as to which university he will attend this fall, he has “set his sights” on studying finance.

Other individuals, firing 196’s in the senior match, were Elias Davenport from Cos Cob; Scott Condo and Michael Acampora from the Middlefield Rifle Club, taking 2nd, 3rd & 4th places, respectively. Jeffrey Doerschler (Middletown Rifle & Revolver Club) who just this year reached the correct age of 55+ allowed him to capture the High 55+ senior individual award with his 195.  Also firing 195’s were Tucker Fowler (Middlefield RC) and Kaitlyn Kutz (Cos Cob).  Tucker nabbed 5th place senior and Kaitlyn took High Senior Woman.  Middlefield’s Stephen Lonczak rounded out the 195’s.  A special award went to Amanda Commesso, an alum from Vinal Tech, called the “Shot in the Tail” award for her last place, with a very respectable score of 145.  No one is a loser that fires in this match, the only losers are those that don’t come out and shoot.  Many shooters dust off their rifle, just to fire in this match, and we give kudos to them.  Congratulations Amanda for your great performance and for continuing to support the shooting sports!

In the Junior match, Kaitlyn Kutz’ father drove thru the night from West Virginia University’s (WVU) training camp to get her to the firing line. The long drive obviously did not tire her out as she posted the winning score of 197, cleaning prone and sitting, dropping two in kneeling and one in offhand.  John Hammond, WVU’s coach must have done an admirable job of fine-tuning her standing position!  Four 195’s were next on the scoreboard.  Leading was Vinal Tech’s Scott Condo for Hi High School Individual; Kevin Landino, North Haven, 2nd place; Tyler Glynn, Montville HS, 3rd place; and, Xavier’s Riley Lyke for 195 for 4th.  Kaitlyn, Tyler & Scott will be leaving shortly to compete at the National Junior Olympic Shooting Championships in Colorado Springs. Dylan Lorence, who just received official notification of his appointment to the U.S. Coast Guard Academy, fired the top 194 for 5th place overall junior.  Also firing 194’s were Jake Mnich for Hi Prep School Individual and Stratford PAL’s Sophia Cuozzo for High Junior girl.

The favorite category for me is the Sub-Junior category. Watching the young shooters come off the line and waiting to see what percentage bar is going on their merit medal makes the hours involved in running the match all worthwhile.  This year proved to one of the highest scoring years we have had for this category in a while.  Not one sub-junior fired below the 100 mark for an aggregate score.  Merit medals aware awarded based on score with 50% being the lowest for a fired round of 100.  All shooters fired 63% and above which I think reflects on the experience of coaches we have in this state.  Leading the pack for the 2nd year in a row was Blue Trail Range’s Emma Acampora, firing a 199 with 18 x’s.  It’s tough to lose to a girl, but Cos Cob Kyle Kutz did so with dignity (probably knowing that this is her last gallery match as a subbie), four x’s behind and settling for 2nd place.  Firing a 197 for High Sub-Junior girl was Stratford PALs Ashley Edwards-Gillis.  Bridgeport RCs Haley Renolds fired a 196 for 3rd place; Kayley Pasko (Metacon) was 4th with a 194; and 5th place went to Blue Trail Range’s Max Rook.

The team match seemed to display a few upsets. Middlefield’s “Silver” team of Michael Acampora, Stephen Lonczak, Jacob Lagace & Joshua Lindgren fired a match winning 770 to upset their teammates on the “Gold” team with their 768 (firing members Scott Condo, Jim Cooke, Dylan Lorence & Leonard Remaly).  There was some noise about one shooter on the gold team’s age being higher than all four combined ages on the silver team, but the taunts were snuffed when the elders threatened not to buy the pizza.  3rd place went to Suffield Academy’s “Senior” team, with a 764 of Jake Mnich, Meg Williams, Aya Ishikawa & Chris Choi.

High School conference champions from Xavier High School captured the Gold in the Junior team match with their fine 766 (Riley Lyke, Dylan Lorence, Michael Acampora & Jacob Lagace). Trailing by only three points was Cos Cob’s “10.9 & Chill” team of Kaitlyn & Kyle Kutz, Gillian Riordan & Laura Milukas.  The recipient of the rotating “Prep School” trophy was returning Suffield Gold Siberian Tigers (same competitors as in the senior match as noted in the above paragraph).  This rotating trophy has known no other home for several years and I don’t think that Suffield Academy plans on letting it change residence anytime soon.

The team winners in the sub-junior category are definitely going to be a force to be reckoned with in future matches. All four members fired scores in the 90’s to post a total aggregate of 773.  Team members of the Blue Trail Range “Gold” team are Emma Acampora, Max Rook, Lisa Courville & Sydney Hawke.   The much younger team members from Quaker Hill put up a good fight with their score of 747 for 2nd place.  In one more year it will probably be team members Billy Wolfe, Amanda Grano, Liam Ward & Seth Trotochaud on the gold podium as they were the most consistent group in firing almost the same score on each target.  Landing 3rd was the Stratford PAL “Pickerals”, consisting of Ashley Edwards-Gillis, Taylor Niemiec, Devon Dupray & Shane Burton.  For a detailed commentary of the results and photos, visit the association’s website the end of March – www.csrra.com or Blue Trail Range’s website at www.bluetrailrange.com.  Online results, without the commentary, are available at www.orionresults.com/csrra.

The CSRRA is very thankful to our generous supporters of this match. In past years, when a group of volunteers has had to score almost a thousand targets, mathematical and “plugging of shot” errors are bound to happen.  The problem was solved when a donation arrived and the Orion Scoring System was quickly purchased.  The match staff appreciates everyone’s patience as we premiered the system on such a large match.

The CSRRA board of directors and Match Directors Deb Lyman and Tom Pasko would like to thank Vinal Tech alum Johnathan Chamberlain for all of the man hours he put in ordering the equipment and building the competitor database in time for this match. Shooters were able to leave the range within 30 minutes of firing their last shot with merit medals and certificates of achievement in hand and knowing that an accurate score had been posted. Quite a feat to premier the system successfully with a match fielding almost 300 competitors!  Thank you Johnathan, and members of the Stanley family.

Thanks also to our host, Blue Trail Range and their staff; Britt Harrison, Kayley Pasko, Antonietta Cuozzo, and Christa Acampora for assisting with the Merit Medals; Michael Acampora and Anthony Cuozzo for acting as Range Officers; Grandma Woessner and the Suffield moms for hosting the Prep School afternoon; and, to the coaches, parents, athletes, and staff that promoted the match. If you enjoyed yourself, talk a fellow competitor into participating next year; if not, give one of the Match Directors a call and let’s see what we can change to make 2017’s match even better.