The Connecticut State Rifle & Revolver Association (CSRRA) fielded 13% of the shooters on the Wa-Ke’-De Rifle Range’s firing line in Bristol, Indiana.  Coach David Lyman was quoted as saying “The Amish community hosted the best two days of weather for the metric position shooters that I have seen in almost thirty years for this tournament”.  Since his group began the trip with a 2-day “team building” event at Cedar Point in the pouring rain, he was grateful for the sunny, dry, calm weather.

At the end of the two-day metric position match, the team huddled in the tent for a synopsis of the first of four grand aggregates for the group.  No one had really shot poorly, but no one either could brag of a stellar individual performance.  Just who probably had had the most successful match could be determined by how many award points each competitor had accumulated – so the counting began.  When the tallying finished, it would probably be Eric Sloan leading the pack as he fired a phenomenal 371 in the Any Sight Standing Match for 2nd Overall out of the 110 competitors and finished 14th in the grand aggregate with a 2241.  Next, we followed in a “three-in-a-row” clump with Kaitlyn Kutz, Sydney Katz, and Scott Condo for 27th, 28th, & 29th places, respectively. 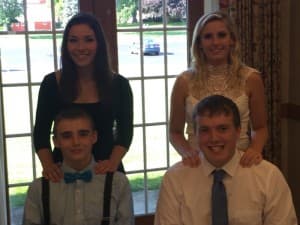 With four of Connecticut’s top shooters so high in the rankings, it was no surprise that Eric Sloan and Scott Condo were declared the 3rd Place Overall & Junior team in the Any Sight Team match with a unfired (scores taken from the individual matches) team total of 2242.  In the same match, the female due of Kaitlyn Kutz and Sydney Katz scored a 2226 for 5th junior team.  Realizing that Connecticut’s top team finish was 57 points behind the 1st team, the Nutmeg athletes knew that when the metric targets were put away and the national targets came out for the next two days, they were going to have to sharpen their skills.  The CSRRA junior shooters did not want to return home without a national team title.  (Photo–Left to Right: Kaitlyn Kutz, Sydney Katz, Scott Condo, Eric Sloan).

Other notable junior individual accolades in the two-day metric position match were:

As you can see from above, Connecticut grabbed the majority of the individual place wins.  Senior shooter Lisette Grunwell-Lacey was 2nd Woman Any Sights with a score of 1134.  Six points behind for 1st Intermediate Senior Any Sights was Jeffrey Doerschler.

For a copy of the article, click here Article National Metric Pos Champ Bristol In 2015.07.  For complete results of the matches, go to this website http://compete.nra.org/championship-results/nra-national-smallbore-rifle-championships.aspx