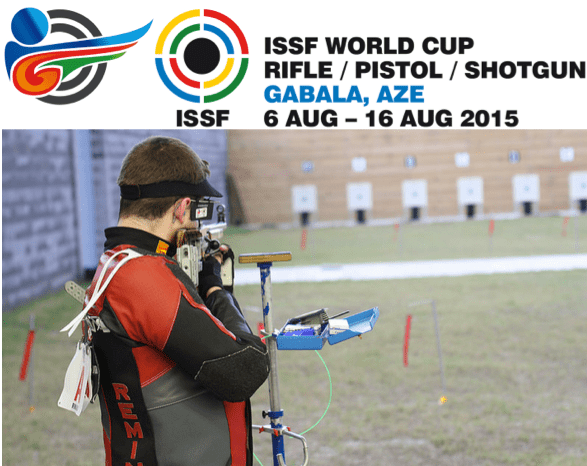 Remington Lyman is on his way with the USA Shooting Team to compete in the International Shooting Sport Federation (ISSF) World Cup in Gabala, Azerbaijan.  1,106 athletes from 90 countries will be participating, marking the final opportunity for rifle and pistol athletes to earn coveted quota slots for the 2016 Olympics in Rio.  A quota spot is necessary for a country to compete in Olympic competition in any particular discipline (swimming, gymnastics, shooting, etc.).  So far, the United States has earned 13 of the possible 20 quotas available for rifle and pistol athletes.  At the Gabala World Cup in Azerbaijan, Remington will be competing in the Men’s 3-Position Smallbore Rifle event.

Looking to earn the 7 remaining Olympic quotas, USA Shooting has put together a mix of newer and seasoned talent.  While Remington has been competing on his home range (Blue Trail Rifle Range) in Wallingford Connecticut since he turned three, his first international experience was competing as a member of the USA Shooting Junior Team in the World Cup in Granada Spain.   There he placed 35th overall individual in the Prone Smallbore Rifle events; and, 5th place team finish, just missing the bronze medals with USA’s team score of 1839.7 to Russia’s 3rd place score of 1847.  Currently, he competes on the NCAA Collegiate Division I Varsity Rifle team at The Ohio State University (OSU) in Columbus, Ohio.  His college career honors at the collegiate level already include earning NRA Second Team All-American honors in smallbore and air rifle, selected to the College Rifle Coaches Association (CRCA) second team, and earned an individual spot in the NCAA Championships in Fairbanks Alaska this past spring.  Along with his parents, David and Deborah Woessner Lyman, Meriden, Connecticut, all three are double-distinguished experts and have over a dozen National Smallbore Rifle Championship individual and team titles to add to the family scrapbook.  OSU Coach Ryan Tanoue, a 7-time All-American, has won the 2005 Munich World Cup and Beijing Olympic Quota Place.

With this history of Remington’s talent and the coaching history supporting him, one could wonder whether or not Remington would be defined as the “newer” or “seasoned” talent, but Connecticut wishes him and the other USA Shooting Team members the best of luck in Azerbaijan in securing the last 7 Olympic quota slots.  The shooting events aren’t broadcast on TV yet, but you can watch the matches live via the internet by accessing “ISSF Live Ticker” at www.issf-sports.org/competitions/venue.ashx?cshipid=1696

We offer the Massachusetts Non-Resident Concealed Firearm Permit course for only $94.99!